be a Queen of Unicorns

Your Majesty, Queen of Unicorns

Zosia is a young adult mare of a winged unicorn

Zosia has pink fur with white underbelly.She also has a pair of wings on the underside, they are pink and underneath the wings they are purple violet mane, which is largely on the right side, also has a purple tassel tail and a golden horn on the forehead.

Zosia can fly and gallop 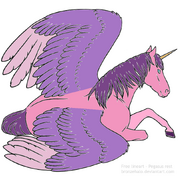 Add a photo to this gallery

"tThe world has changed and none of us can go back. All we can do is our best, and sometimes the best that we can do is to start over."

Retrieved from "https://the-lion-guard-new-beginning.fandom.com/wiki/Zosia?oldid=27683"
Community content is available under CC-BY-SA unless otherwise noted.